No more desktop pc with stationary users browsing the internet on the soon to be dead browser, Internet Explorer. Internet is portable and it is booming.

That scenario is everything but gone. Stationary computers belong in workspaces and the modern day user is on the go and the second screen is having glory days in the able hands of the user. Phones are with you anytime and anywhere, and so is the internet.

Numbers may not be sexy, but they don’t lie. So bear with me. Here are three obvious reasons why mobile internet is the future., presented to you in numbers.

1. Who uses the Internet? 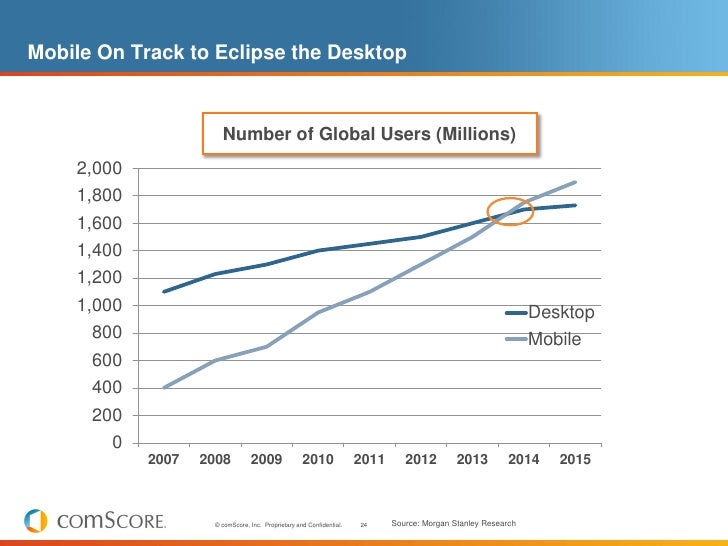 According to a report from ComScore, 2014 was the tipping point where desktop internet users were overtaken by mobile users. Mobile internet users are projected to reach 2 billion within 2015, and this will not be the end of it. Item #2 on this list will reveal the real king of the castle.

If you don’t have a mobile version of your website yet, try the automatic converter at bMobilized.com. Looking at the graph here, the steep blue curve stands out. That solid blue curve is the blue dotted and the blue dashed combined. The rocketing dashed line is smartphones. That curve is worth watching for the future.

Acclaimed digital trend-spotter Mary Meeker presented her ”Internet Trends” from 2014, she showed the world that mobile internet usage had climbed from 14% to 25% from ’13 to ’14. In Europe mobile usage had doubled from 8% to 16%, and North America had gone from 11% to 19%.

Companies across the globe now face a new challenge. It is no longer optional or nice to have, to make websites mobile ready or responsive. Users are browsing with their smartphones, and the numbers are rising. Anyone ignoring this fact better have a really good reason (or a philanthropic business).

FREE Mobile Business Tips
Learn how to get MORE TRAFFIC through your mobile site.